Something just occurred to me. While I was at the retreat at Holy Cross Monastery two weeks ago, I had this really brief vision. I saw an image of a map of all the places I’ve lived, and I saw that by connecting those places with lines, it formed the shape of a cross. So this morning, after coming home from church, I pulled up that map of my “Center of Gravity” (remember that old thing?) I played around with it, and I found that, indeed, there is indeed a way to very clearly make a cross.

Here it is without any lines, just markers for my homes over the years: 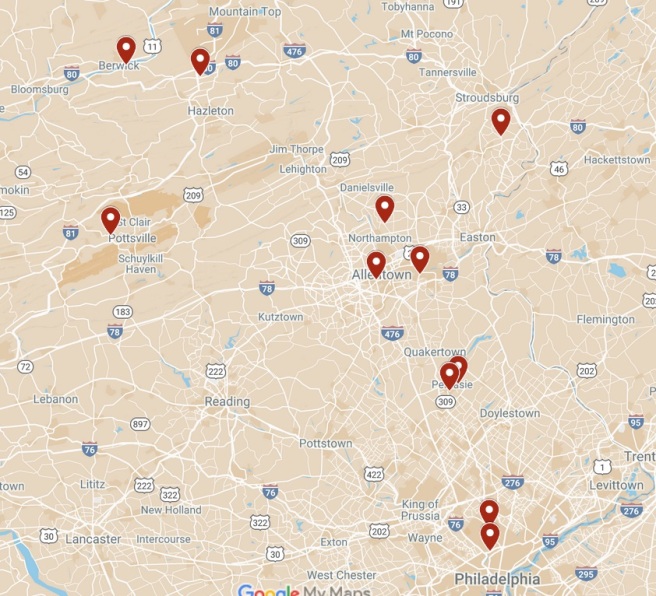 I looked at that, and I immediately saw the cross. I think I was primed to see it because of PA Route 309. For years, I joked about how important it was to me to live near Rt. 309. Here’s the map again with 309 colored in: 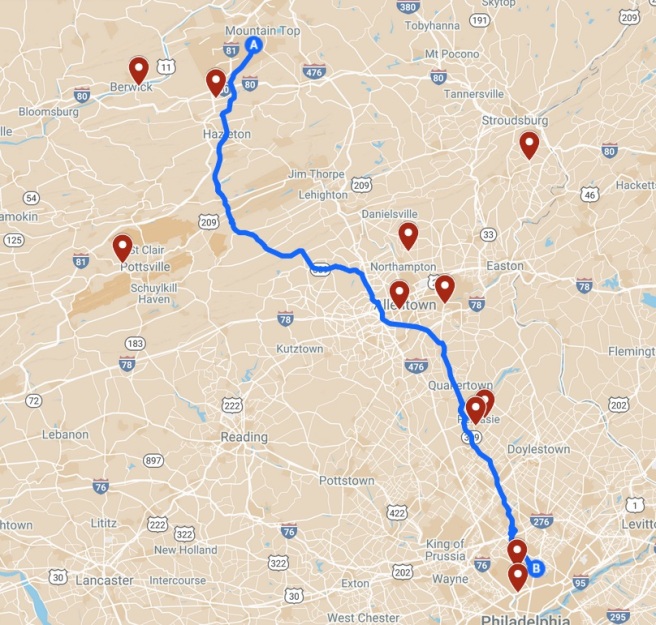 You can see where I got the idea that I always lived near that road. In fact, apart from three outliers, which are my birthplace (Minersville in the west), and my two most recent residences (Nescopeck in the northwest and Bangor in the northeast), I’ve been within nine miles of my “lifeline” for my whole life. But it doesn’t look much like a cross, or even a straight line. But let’s go back in time. What is now PA-309 was, until 1968, a federal highway, designated US-309. And it didn’t follow exactly the same route. The map below shows an approximation (in green) of what US-309 looked like in the 1940s. 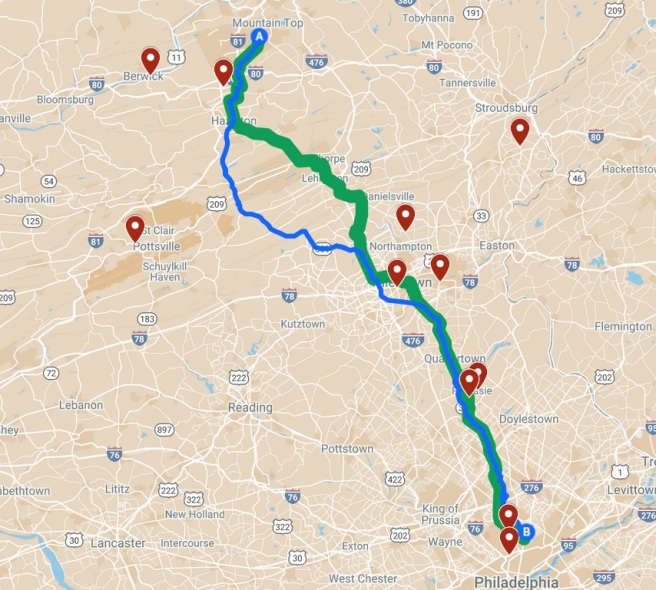 That’s straightening out some. Let’s finish up the job, and add a cross-bar. 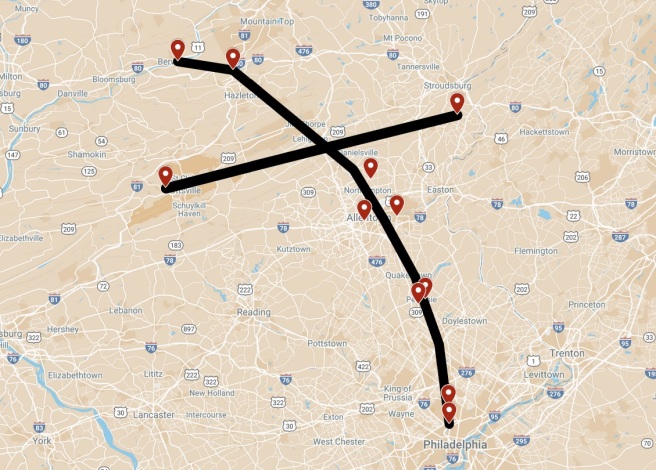 Now there’s a cross. The vertical comes suprisingly close to all the places I’ve lived save two, it has a very steady (and consistent) curve, and it more-or-less coincides with old US-309 for most of its length. And the horizontal is even more interesting to me right now, because it’s the connection between the place I was born, and where I live right now. Which means that before I moved to Bangor, I never could have seen this cross. The map of my life would be this one curvy line, plus an outlier at my birthplace. It also means that there’s a very good chance that I’ll never see this cross again. I have no plans to move anytime soon, but I expect that I will at some point. And when I do, there’s a good chance that the next location will not fit into this image. Which means that right now, right here, my whole life is the sign of the cross.

And this feels right to me. Because it’s right now, while I’m living here, that I undertook this time off to figure out my self and my relationship to God. It’s right now, while I’m living here, that I traveled to the place of my baptism, and discovered anew what it means to me. It’s right now, while I’m living here, that I figured this out. Of course, I didn’t really figure this out, actually. I received it. It was a gift. A gift that shows that I have been in the bosom of Christ for my whole life. I have been swimming in the waters of baptism my whole life. I’ve walked this journey. It’s there, right in front of me. God revealed to me last week at a labyrinth that my true calling is as a “spiritual mapmaker and mapreader.” God revealed to me today that I’m also a map myself. A map that points to Christ.