One of the stranger habits I have is this: figuring out my “geographic center of gravity,” in other words, the very center of where I have lived throughout my life. It works like this. I have a spreadsheet in which I have the latitude and longitude of every place where I’ve lived in my life.

I then take an average of these coordinates, weighted by how many months I lived at each. This weighted average gives me a new set of coordinates, and that is my center of gravity. I have lived the same amount of time north of that spot and south of it, and the same amount of time east and west of it. As of September 2016, my center of gravity is along Municipal Road in East Penn Township, Carbon County, moving eastward toward the village of Ashfield.

Okay. Now, here’s where it gets interesting. I’ve drawn up a map that shows how my center of gravity has moved over the years. I’ll try to explain it below the map.

Okay. So, the green line represents everywhere my center of gravity has been throughout my life. The very first place I lived is the red marker on the left. I spent my first 4.5 years in Minersville, a small borough in Schuylkill County, so my center of gravity just sat there, in that one house, for 54 months. Then we moved to St. Johns, a vanishingly small village in Luzerne County, and I lived there until I left for college. The portion of the green line heading northeast from Minersville shows the motion of my center of gravity over the course of my childhood. It just kept moving toward St. Johns, closer and closer each year. (If you were to continue that NE line another seven miles or so, you’d reach St. Johns.) Then I moved to Allentown for college, and the line makes a sharp turn, going southeast to follow me there. If you look closely, you’ll see a blue dot right in the upper corner at that turn…that blue dot is the Humboldt Reservoir in Hazle Township, Luzerne County. My center of gravity did a slingshot around the reservoir, and continued to head southeast for the next fourteen years. Even though I moved several times during those years, every place was significantly southeast of St. Johns, so my center of gravity kept moving that way, until hitting that bottom right point. (Which is pretty much at the parking lot for the Appalachian Trail on top of Blue Mountain on Rt. 309.) That’s when I moved back to Nescopeck, in Luzerne County. For five years, my center of gravity began to retrace its steps northwest, until my most recent move to Bangor. These past four years in Bangor have provided the eastward motion at the end, stopping at the blue circle, which again is the current location of my center of gravity.

One interesting thing is that even though I spent less than five years of my life living in Schuylkill County, my center of gravity has been in that county for the vast majority of my life. The thin black lines in the picture above represent a portion of the Schuylkill County border. You’ll notice that I was centered in Luzerne County for a time at the top “peak,” as I circled Humboldt Reservoir. I was briefly centered just inches into Lehigh County at the bottom right corner, at the A.T. parking lot. And for the past few years, I’ve been heading east into Carbon County.

To put it into a different perspective, here’s a map showing all of my physical homes, along with the green center of gravity line: 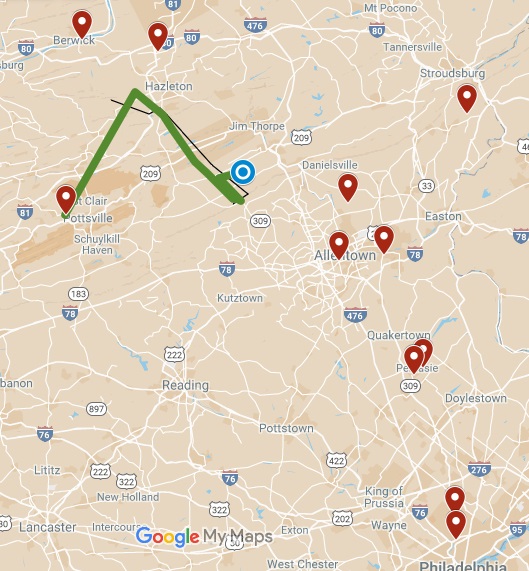 Weird, isn’t it, how much it sticks to the upper left? It’s all based on time. I spent a total of 18 years in Minersville and St. Johns, and only three years in Philadelphia. So because it’s weighted, the northern homes have “stronger gravity” than the southern ones, and keep me closer. It’s also interesting that over time, the blue dot moves more and more slowly, because each month is worth less and less compared to all the months before.

I hope I’ve explained this well. If not, let me know in the comments, and I’ll try to clarify. And, if any of you think this is interesting and not completely and utterly dorky and bizarre, I’d be glad to run a “center of gravity” for you. (You’ll have to provide me with every address you’ve had, and how long you lived at each…don’t put that in the comments!)

12 thoughts on “My Center of Gravity”