I remember 35-mm film. I used to have a point-and-shoot camera. Simple, just aim the camera at your subject, and hit the button. I had friends who had SLR cameras; much more complicated, but they could get some beautiful shots. The thing their cameras and mine had in common? 35-mm film. That little cylinder of potential, which came in a few “speeds” (100, 200, 400, and 800, if I recall). Each one was better for certain things (weren’t the higher speeds for outdoor shots?) — but I never really tried to get the right one, because I never knew what I’d use a roll of film for until I needed it!

There were a few other options for film. Something called “medium format” for real professionals, I think. And my first camera used something called 110 film. Looked like this: 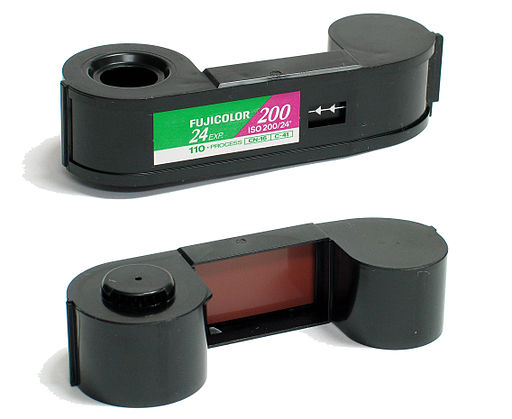 My sister had a camera which took Disc format. 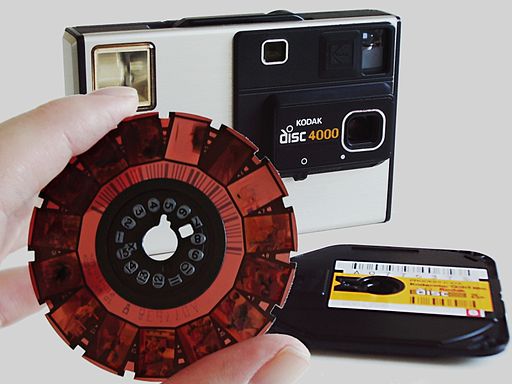 But we both eventually graduated to 35 mm. That was the standard, the norm. That’s what cameras were all about. Pop in some film (make sure to be in dim light while you do it), and start taking photos. But you’ll never, never know how those photos turn out until later. Taking a picture was a gamble. It might be lit wrong. They might have blinked. You might have your finger in the corner of the picture. (Oh dear God, how often I did that.) And you’d never know for days, or weeks, or months. Because you had to first finish the roll of film (25 exposures or whatever), and then carefully remove it (again, in dim light), and then either take it or mail it someplace to be developed, and then wait for it to be processed. (Or, if you were really hardcore, take it in your own darkroom and develop it yourself!)

And then you got your prints back (and your negatives). And that was that. There were airbrushing and retouching techniques, but I had no clue how to use them, nor did I have access to any equipment necessary. The prints were the prints. The photos were the photos. And you certainly wouldn’t take dozens of them “just in case,” because film got expensive! So you accepted what you had.

My oh my, how things have changed in just a decade or two. I can remember when digital cameras first hit the market, and I really didn’t see any need for one. Why would you want to pay so much money for something that will just give you pixelated photos? But they improved. Wow, did they improve. And at least in the circles I walk in, that’s literally all there is. Who uses film? We got our first digital camera when my wife was pregnant with our first child. We knew we’d want to get a million photos of that kid. (And we did.) And that’s one of the great things about digital. You can take a million photos, and so long as you offload the photos now and then, you really never run out of space. You never run out of film. And retouching is simplicity now, especially with every operating system and every social media site loaded with “filters.” And with Photoshop, sheesh, you can put yourself and Neil Armstrong together playing ping pong with just an hour of work. (Well, I can’t, but the technology is right there.) And there’s absolutely no waiting. Sure, you still have to upload your photos if you want professional prints of them, but who gets professional prints except for particularly special ones now? Just save ’em on your phone, or your computer, or your Facebook or Instagram page, or whatever.

And you don’t even need a camera. Every phone’s got a camera 100 times better than my old 35 millimeter point and shoot. My laptop’s got a camera. Check this out. Instant photo of me typing this right now.

What an amazing world. If my kids ever read through this blog, they will have no idea what 35 mm film is. No clue at all. They will have no clue what film is, for that matter. And that’s okay. But wow, what a roller coaster.