So how can I describe the experience of viewing a total solar eclipse? Not with pictures, I fear. I didn’t bother trying to get any photos of the sun, because it just wasn’t worth it: with a point and shoot or a smartphone, the photos wouldn’t hold a candle to the professional ones that are no doubt filling the web at this point. Plus, focusing on trying to take a picture would have distracted from the event itself, particularly during totality, which was so absolutely gobsmacking that I couldn’t look away even to photograph my daughter’s face, which was my original plan. I did get a few photos before totality, not of the sun, but of my terrestrial surroundings. I’ll share those here, but let Google be your friend if you want to see some really good shots of the sun itself. (The featured image for this post is from NASA’s website.)

So I’ll try to do it in words for the most part.

My eight-year-old daughter and I have been in Hopkinsville, Kentucky for two days; we came here specifically to see the eclipse. We are staying at a hotel a mile or so outside of downtown. I’ve been surprised at how light the traffic has been — we encountered no traffic coming here or driving around. We were always able to find a parking spot downtown. The news had us thinking there’d be traffic jams everywhere, but we encountered none. Thankfully!

So today we weren’t that surprised to see that there weren’t tons of people gathering with us to view the eclipse. We went into an open grassy field across from the hotel, and there were maybe three dozen people in small groups in the field. 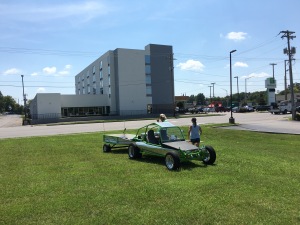 My daughter and I got out to the field around 11:40 am, and waited for the eclipse to begin at 11:56. We were pretty miserable at first. It was about 85-90 degrees, and with the humidity, it felt nasty. There were a few clouds near the horizon, but nothing anywhere near the sun. This was great for viewing, but lousy for our morale. Blech. Sweat and whining. Luckily, there was a light breeze which helped a lot. At noon, we looked up with our eclipse glasses on, and we could just see the tiniest bite of the sun missing. Nothing changed around us. It stayed like that for the next hour. The bite got bigger and bigger, and the sun started to look more and more like Pac-Man, and then more and more like a crescent. But it was still sunny and hot. We were still complaining. But then, about 1:00, things started to change.

About 1:00 pm, 2/3 of the way to totality, the light all around us began to take on an odd pallor. It wasn’t an unearthly color, but it was dim, in a way that evoked a sense of late afternoon, not quite twilight. And yet the shadows we cast were still short, as you would expect in the middle of the day. That was an odd disconnect, dim light with short shadows. I took my sunglasses off, and I could see very comfortably without them (not looking at the sun, of course.) I was able to look at my phone easily; there was no longer any glare, despite the fact that it was a perfectly sunny day. It was sunny, yet dark at the same time. That’s the only way I can describe it. The temperature was also noticeably cooler. It felt comfortable and pleasant. Looking through the eclipse glasses, the sun began to look like a yellow crescent moon. My daughter said it looked like the yellowest banana ever, like a magical banana. It was only ten minutes until totality, and she didn’t believe me that it would be completely dark soon. But then the air around us starting dimming more and more quickly. The lights at Walgreens came on. The streetlights came on.

“Take off your glasses!” I told my daughter. We took them off, and it was…

I knew what an eclipse looked like: I’d seen many pictures of them.

But to see it in the sky was different.

The world was dark, but not midnight-dark.

But the sun, the sun itself, was black

sun was darker than anything else in the world

surrounded by the white corona

I didn’t look for stars

or listen for birds

or even look at my daughter’s face

I just stared at this hole in the sky

this hole in the world

this hole in the universe

a perfectly round hole that was ripped into reality from somewhere

a bright flash appeared on the right

There was now a yellow sliver on the right side, a sliver that grew and grew. The world slowly returned to normal, in perfect reverse of how it went before. The world got brighter, the streetlights turned off, the temperature rose. We stayed for a little while, but it was all rather anticlimactic after that. We left when about 30% or so of the sun had returned. A partial eclipse is nothing like a total. They are two completely different beasts, and immediately after a total eclipse, I felt no urgency to stay for the second half of the partial.

I’ve heard that many people, after seeing their first total eclipse, become eclipse chasers. I understand how that can happen. It didn’t last long enough. I was so absorbed in staring at this sight, and I really want to see it again. I may just do that. We’ll see. There will be another one in the US in 2024, and one in South America in 2019. We’ll see. There’s something in that hole I want to see again.

5 thoughts on “The Hole in the Sky”