It’s right around All Saints Day. All Saints Day falls on November 1 every year, and many churches observe this holiday on the Sunday following. And my mind is turned today to those who have died; those with experience in the liturgical church will understand why. It is tradition on this day to specifically remember, often with candles and chimes, those who have died in the past year. It’s also Year C in the liturgical calendar1, and that means that my mind is turned toward my grandparents. You see, for some reason I have gotten into a habit of preaching about my grandparents on All Saints Sunday in year C. Nine years ago, I spoke about my deceased maternal grandmother, and I called her “St. Grandmom,” because she truly was a saint in the vernacular sense of the word, a sweet and kind woman full of love and peace. Six years ago, I spoke about my paternal grandmother, who by then had also died, and I called her “St. Grandmama.” I discussed how St. Grandmama was not the stereotypical “saint”…she was certainly loving, but not always sweet. She was bright and clever, but also judgmental. I discussed how she’s nonetheless a saint, because (in a Lutheran understanding) sainthood is something given by God, through baptism. We are all saints, even as we are all sinners. Three years ago, my paternal grandfather had recently died, and I referred to him and my grandmothers: St. Grandmom, St. Grandmama, and St. Daddy Jack. (Honestly, this was mostly a repeat of the sermon from six years ago, because during that time I had moved to a new congregation, and I could get away with it.) And now you’d think I would preach this year about my maternal grandfather. And I’ll tell you…he is certainly on my mind today, but for a very different reason.

I never met George Boyer. He died of a heart attack on Halloween 1962, when my mother was a teenager. My grandmother remarried, and I have very fond memories of her second husband Adam, who was certainly a grandfather to me. But I have always wished I could have known George. One of the reasons for this is that my mother has always told me that I am his spitting image. 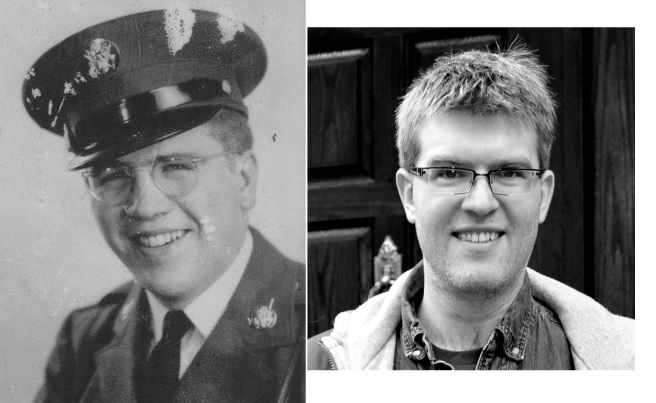 And today is the day he died. It’s not the anniversary of his death; that’s not what I mean. I mean that today, I am the exact same age he was when he suffered that heart attack. As of today, George had exactly as many days of life as I have had so far. If I were him, my allotment of days would now be over. And that is so weird to me. I have always felt a kinship with him, even though I never met him. I have always felt that he was a special part of me, a part I could never really know…and now that part is gone. As of tomorrow, I’m striking out on new paths by myself. I don’t know why, but for some reason it feels like he has to leave right now, that some part of me has to leave, because he didn’t live any longer. My inner St. George has lived his life, and I now have to go on without him. It’s not sorrow…it’s not grief…I’m certainly not comparing this feeling to what my mother and her family went through when the real George died. But it’s kind of a lonely feeling, maybe? Or kind of a melancholy growing pain, a sense that I’ve now outgrown something that was important to me. Tomorrow, I strike out on my own. Tomorrow I have to write a sermon for All Saints Year C, and I don’t think I’ll be mentioning my grandparents in this one.

I am grateful for my grandparents, for all of them. But today, I’ll be lighting a candle in memory of George, my grandfather, my doppelganger, my inner alter ego, my patron saint. I’m not sure I’ve used his allotment of days wisely or not, but it looks like I have some extra days ahead of me, days he never had. I’m going to try to live in those days so that he would be proud of what I do with them.