On August 21, 2017, something amazing will occur. The moon will be precisely between the earth and the sun, and this will cause a total solar eclipse.

I can remember several eclipses that have occurred during my life. When I was about six, my father woke me up before dawn to see my very first lunar eclipse. We walked down to the parking lot of our church, and watched as the moon gradually disappeared from the sky, and then reappeared, as the earth’s shadow slowly covered it and then moved away. (I also remember that he then took me out to breakfast afterward…I believe it was my very first Egg McMuffin.) I remember in high school my best friend Steve and I used to go into the cemetery near my house to watch lunar eclipses. I remember lying in the football field at college with my friend Nick to watch one. Lunar eclipses were always special. Kind of uncommon, happening about once or twice a year. And when they happen…anybody on the night side of earth can see it (clouds permitting). But solar eclipses…something entirely different.

Solar eclipses are when the sun disappears from the sky, not the moon. During a total solar eclipse, the sky becomes completely dark, as night. Solar eclipses are far more rare than lunar, partially because you have to be in the right spot. The moon blocks the sun’s light, but only in a particular area on earth’s surface. To be precise, it draws out a line along earth’s surface, along which the eclipse moves over time. This “path of totality” is about 10,000 miles long and about 100 miles wide, and you have to be somewhere along the path in order to see the total eclipse. There’s something special about the path of totality for next year’s eclipse, and I’ll explain that in a minute.

But first I want to reminisce some more about eclipses. I can recall two solar eclipses that occurred in my lifetime. I recall the total eclipse of July 11, 1991, which was the last total eclipse visible from American soil. Of course, the only America soil you could see it from was Hawaii. I certainly didn’t see this one in person, but I distinctly remember being at my friend Virginia’s house watching live news coverage of it. I remember the annular solar eclipse of May 10, 1994. It was the end of my second semester at college. Where I was wasn’t along the path of totality (and to be technical, there wasn’t a path of totality because this was an annular eclipse, which is when the moon doesn’t quite cover the sun, but leaves a ring of sunlight, but anyway…), but we were able to experience a partial eclipse. That was pretty cool. The whole world turned this odd shade of amber, and there were crescent-shaped shadows all over the place. Kind of like this: 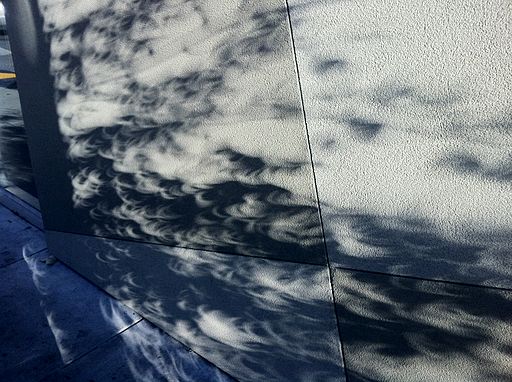 Now, those who are in Pennsylvania on August 21, 2017 will see something much like that picture above. Because our fair commonwealth is out of the path of totality, the eclipse will be partial here. So I’m heading southwest, to Kentucky, to just about the best spot on the whole path of totality.

I said before that there’s something interesting about next year’s eclipse. It’s that the path of totality lies completely within the continental United States. Well, not quite…it also extends into the Pacific and Atlantic Oceans. But the only spots on land where you can see this eclipse are within America, and it stretches from sea to shining sea. Some are calling it “The Great American Eclipse.” (Of course they are.) The eclipse will make landfall at Pacific Palisades, Oregon at 10:57 am PDT. It will return to the ocean near McClellanville, South Carolina at 2:49 pm EDT. The moon’s shadow will take just under an hour to travel 3000 miles across the country. The line connecting those two points is called the “center line,” and the eclipse will last longest the closer you are to that center line. The further north or south you travel from that line, the shorter the time of totality will be, until you pass beyond the 100-mile wide path of totality, at which point the eclipse will only be partial. Click here to see an excellent map of this.

The city of Hopkinsville, Kentucky lies along the center line. Because of some other astronomical considerations I don’t quite understand, just about the very longest time of totality will be just northwest of Hopkinsville, so that’s a good place to go. I drove down there a few days ago. (Yeah, just a quick 12.5 hour drive one way. Day trip!) I met someone at the Hopkinsville-Christian County Chamber of Commerce who told me that they are planning a huge event next year. They want to be the destination for Eclipse 2017. They will be holding a few events (including their annual rodeo) to coincide with the week of the eclipse, to make it a very attractive spot to be. She convinced me. I’m very excited to head there next year. She even gave me my first pair of “eclipse glasses!”

Want to learn more about the 2017 eclipse? Here are some links: